Our original Popped Primers page, that referred to the bolt face treatment, (stoning bolt face flat and countersinking the FP hole) described our best effort at reducing or possibly eliminating incidents of popped primers when shooting the imported Russian Berdan primed ammo. And for some customers, that did the trick. But for others, not always. The issue has been troublesome since the late 80s when we were getting spam cans of “milsurp” ammo, but it seems to be an even worse problem in recent months and years.

But now we can offer our new “Neck & Throat” chamber reaming service that has so far proven to be a 100% cure for this problem. We use a special reamer, mfg’d. for us by Manson, that enlarges the Neck Diameter a thousandth or two and extends the leade, or freebore approximately ¼”. This reduces the spikes in the Peak Chamber Pressure and simply stops Popped Primers from ever happening again, no matter what ammo you use. And it has no effect whatsoever on your ability to use Boxer primed ammo. But if you’re using exclusively Boxer primed ammo, Popped Primers are not a problem for you.

Many Benchresters are likely to scoff at this idea as their train of thought is this would degrade the accuracy of the gun considerably. But considering that Weatherby has calibers with as much as ¾” freebore, that easily shoot 1” groups at 100 Yds, our relatively minor ¼” additional freebore does not have any negative effects on accuracy. Our test guns and many Beta Testers have already proven “no change in accuracy.”

Some may say that removing the chrome from the bore of Russian and Chinese would promote degradation of the bore. But in most of these “milsurp” guns, the chrome has been reduced considerably or possibly been shot out entirely. Simple regular cleaning as you normally would is all it takes to care for it. 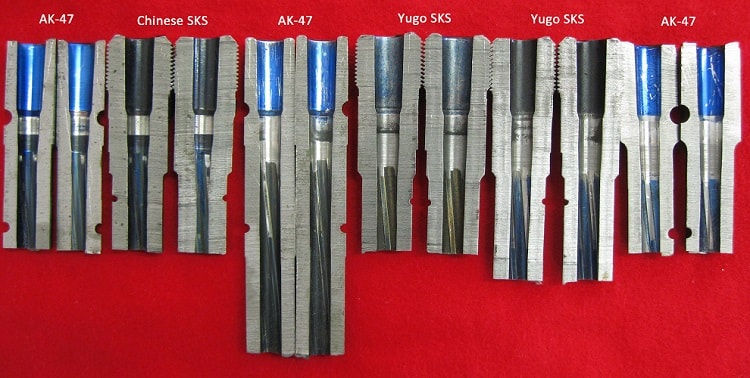 This photo is simply a line of AK and SKS barrels that were “Neck & Throat” reamed and then cut in half. The AK stub and the Chinese SKS stub on the far left, were done with our first prototype reamer. As can be seen, not much extension of the freebore was done with this reamer, but the samples do give a good base line of what an untouched chamber might look like. The prototype reamer just barely kissed the lands. But in the rest of the examples, you can easily see that the freebore has been enlarged by a thousandth or two, and extended about ¼”, by our final “up to spec” reamer. 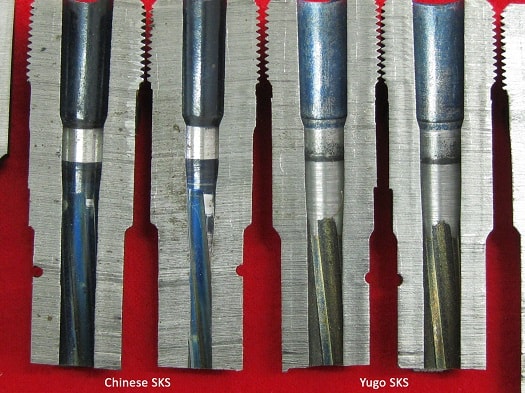 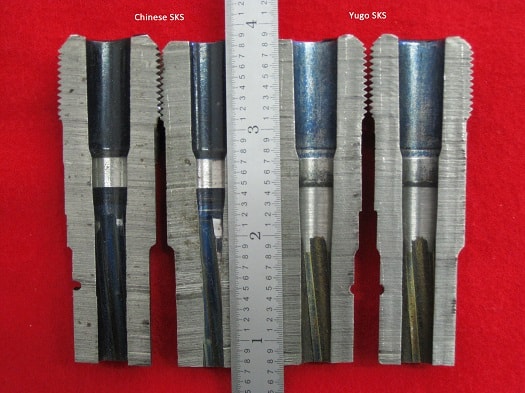 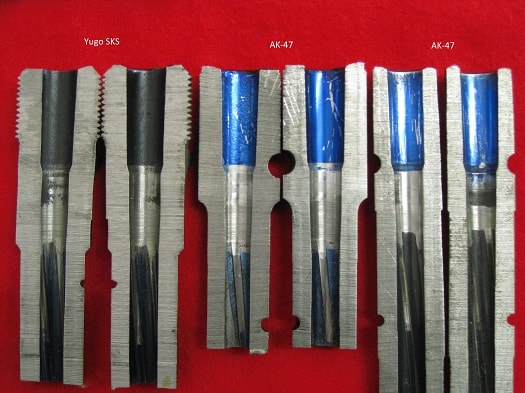 This photo shows the extent a chamber can be affected by years of use/abuse. Notice the uncut areas that have already been eaten away from heat and corrosion. And our “Neck & Throat” reamer just seems to clean them up nicely, possibly extending the service life.

All we need to perform this service for you is your barreled receiver (If it has a bayonet, do not try to remove it). And our FFL is linked below for your convenience.

Print a copy for your records, have a copy available to show the shipper, if requested, and you must include a copy inside the box with the barreled receiver, for the shipment to be legal. You can ship it yourself, no need to involve an FFL holder on your end, as we’ll be able to return ship directly to you at your home or office, wherever you’ll be to accept the package. (Your state laws may require an FFL ship it) USPS, UPS and FedEx all work fine for us with UPS being slightly cheaper in most cases. Use whichever is the most convenient for you. Please be sure to pad the barreled receiver for minimal movement inside the box.

The cost for this service is $43.50 + $22.50 for return shipping. (USPS Priority) And our turnaround at this time is at a minimum, considering what it was in late ’12 and early ’13. So send yours in today, and when you get it back you’ll be able to shoot any and all 7.62X39 ammo available in America or Canada. Our Mail-in form is also linked below, please include a copy of it in the package as well.

While the turnaround time for most all of our Firing Pin Kit Installations, Bolt & Carrier mods, and Trigger Group parts “Installation & Tuning” and especially our most popular service, the “Neck & Throat” chamber reaming, had gotten above 60 days, and even above 90 days for some of our customers in 2016, this last month and the beginning of 2017 are likely to be right at 30 days or less. If work is requested that is not on the mail-in form, turnaround can be affected.

Gunsmiths: Order the Reamer & Tooling directly from our cart and make your customers happy too.

Please fill out and send the Mail-In Form for your Neck & Throat service. Click for Mail-In Form.